2017 marks the 25th Anniversary of the founding of the MIDC. These companies have joined the ranks of our Strategic Partners ($1800 and higher membership) and recognize the importance of fostering business and research collaborations between Maryland and Israel.  “We are grateful that the membership of the MIDC is so diverse, representing individuals, companies, organizations and businesses throughout the State of Maryland. Our membership and volunteers make our job of attracting Israeli companies to Maryland easier,” stated Barry Bogage, MIDC Executive Director.

Baltimore County Department of Economic & Workforce Development-With nationally recognized public schools and a variety of tight-knit communities, Baltimore County is more than just a great place to do business. It’s a great place for the people who make businesses work. The Department of Economic & Workforce Development is the agency focused on maximizing Baltimore County’s rich diversity of people and talent to stay at the leading edge of today’s hyper-competitive economic development environment. To meet the mission of business attraction and expansion, the department provides a range of services in Business Development, Small Business Services, Lending, Policy and Planning, Workforce and Talent Services, Marketing and Communications.  Please visit www.BaltimoreCountyBusiness.com.

eHealth Ventures is a consortium of world-class medical organizations, industry leaders, and seasoned financial investors who are partnering to identify, fund and commercialize emerging digital health companies, with a focus on Israeli innovation. eHealth Ventures is operating as a technological incubator, maximizing high potential startups move from ideation to product commercialization. eHealth Ventures is closing its first venture fund and will be working to build on its success for a second venture fund, primarily investing in Israeli healthcare. For more information go to www.ehealthventures.com or info@ehealthventures.com.

Greenebaum Enterprises is a real estate company engaged in the development and acquisition of office, retail, residential and large-scale mixed-use properties. Greenebaum Enterprises has been in business for more than 30 years with over 275 years of combined experience. They are proud to be known and trusted for their solid reputation and successful projects.  For more information go to www.greenebaumenterprises.com.

The Zitelman Group of Rockville, MD (TZG) is a merchant and investment banking firm that has been family owned and operated since 1985. Specializing in real estate, closely held operating businesses, and other non-public investments, TZG is a direct investor as well as “fundless” sponsor with flexible investment periods and investment structures. TZG has both lead and co-invested in multiple Israeli companies, incubators and funds.  To read more go to www.tzg.com.

During its 25-year history, the MIDC has created economic development programs for The Associated’s Israeli sister cities, including Ashkelon since the founding of the relationship in 2003. Ashkelon is the southernmost Israeli city on the Mediterranean coast. The MIDC launched a series of small business loan funds to help companies grow and create jobs. The original fund was $300,000 and provided small loans up to $10,000 for Ashkelon based small businesses. Over 75 loans were made.

In response to Israel’s conflict with Gaza in 2014 when businesses in the city were closed for over 50 days, the MIDC created an Emergency Small Business Loan Fund to help the companies get reestablished. The Jewish Agency for Israel (JAFI) worked with Israeli banking partners to provide a 7:1 match to the $225,000 raised by the MIDC.

“The Associated: Jewish Community Federation of Baltimore and the Maryland/Israel Development Center (MIDC) are committed to continuing to help Ashkelon businesses so they can grow and create jobs for the Ashkelon community, as we have been doing since the Baltimore-Ashkelon Partnership began” stated Jack Zager, MIDC Board Member who serves as Baltimore-Ashkelon Partnership Economic Development Committee Co-Chair. Special thanks to the Hebrew Free Loan Association, individual community members, the Associated and JAFI who have all contributed to the success of the Baltimore Ashkelon Loan Fund.

“The Baltimore Ashkelon Loan Fund, operated by the Jewish Agency with the assistance and funding of The Associated and MIDC, has had a great impact on Ashkelon’s businesses in a very short time”, said Amir Sznajderman, Director, JAFI’s Economic Development and Loan Funds Division. The fund was initiated with two main targets, to help with the establishment and growth of existing businesses, as well as to help businesses that were affected by Operation Protective Edge in the summer of 2014. These loans were designed for working capital to bridge financing gaps created by the slow activity due to the security situation. Zager added, “we are particularly pleased by the very low loan default rate which is important for all involved and provides impetus for future loans”.

To date, a total of 29 loan applications totaling $1,320,000 were approved by the Loan Fund Committee, chaired by Eliezer Priel with Baltimore’s Partnership Director Sigal Ariely, JAFI and bank representatives. The one to seven financial match JAFI arranged with the banks enabled the Loan Fund to leverage the $200,000 initial funding to make a substantially larger impact, creating new job opportunities for the people of Ashkelon and supporting businesses that were impacted by the security situation.

Below are three examples of how the Baltimore Ashkelon Fund Program is working to promote business and economic development to existingnand new businesses.

About Balaban Nursery
The Balaban farm is a family business established in 1985 and sells bushes, climbers, fruit trees, decorative trees, leafy plants and cereal vegetation of different sizes and in a range of containers. The nursery also produces Australian and Mediterranean plants which suit both European and Mediterranean climates. The family applied to the loan fund for assistance to help them manage the difficulties with running the farm, and overcome the losses in the wake of the Protective Edge military campaign in Gaza, and the security tension both before and after the war.

About Bar Code Productions
Bar Code Productions, created in 2014, offers its customers a range of services relating to event production from the conceptual stage to implementation, photography, DJ and music services, hall design and any other element connected to event production. The Baltimore Ashkelon Loan fund was able to help this start-up business with a needed loan for working capital.

About Yemini Farm
Yemini Farm engages in the cultivation of pest-free leafy vegetables, for the ultra-orthodox community. The crops include lettuce and various green vegetables, such as parsley, coriander, dill, celery, chard and various kinds of cabbage. One of Yemini Farms is in the Ashdod regions and it is targeted at the local ultra-orthodox community. The new loan from the Baltimore Ashkelon Loan Fund helped build the new hothouses.

The U.S. Binational Industrial R&D Foundation (BIRD) recently announced the investment of $7.2 million in 8 new projects. Keygene of Rockville, Maryland was one of the recipients and will collaborate with Israeli company Evogene in Rehovot, Israel on the development of novel drought tolerant wheat varieties using genome editing technologies. Read more>>>

The MIDC  is welcoming two new Israeli Companies to Maryland. Ametrine Technologies and InsFocus BI are setting up their North American offices in Maryland. Ametrine Technologies is the creator and manufacturer of multi-spectral camouflage fatigues that make soldiers invisible to heat-sensing cameras. InsFocus BI is an insurance-specific business intelligence suite delivering value to insurance professionals at cost-effective prices.

Roboteam, an Israeli company in Maryland, just announced the launch of its MTGR system, a lightweight combat proven tactical robot already serving in the Israeli and US armies. Israeli startup Roboteam is developing unmanned ground vehicles and now a robot soldier. Read more>>>

More than 25 years ago, Marvin Schapiro was one of the driving forces behind the creation of the Maryland/Israel Development Center (MIDC), recognizing the need to help create jobs in Israel as a result of high unemployment caused by the mass immigration of Russian Jewry after the fall of the Soviet Union, and to spur economic development in Maryland.  To mark the MIDC’s quarter century milestone, Marvin’s family announced they are the Lead Sponsor of the MIDC’s 25th Anniversary Celebration on Sunday, May 7, 2017 at the Baltimore Museum of Industry.

Barry Bogage, MIDC Executive Director, will be awarded the Hanan Y. Sibel Maryland/Israel Business Leadership Award for his 25 years of outstanding professional leadership.  “Barry’s tireless efforts and dedication to the MIDC and the many initiatives that he has driven on behalf of the MIDC over the past 25 years has benefited the economies of both Maryland and Israel and has helped to generate hundreds of Israeli and Maryland biotech, medical device, and cyber security jobs. Barry’s work on behalf of the MIDC and his achievements over the past 25 years makes him the perfect recipient for this award.” said Steve Dubin, Chairman of the MIDC Board.

Governor Larry Hogan will be the keynote speaker at the May 7th 25th Celebration.

Lynn Snyder, Senior Member, Epstein Becker Green and MIDC Board Member is the Gold Sponsor. The Hanan and Carole Sibel Family Foundation, KatzAbosch CPA’s and Consultants; LifeBridge Health/Sinai and the Trendlines Group are the Silver Sponsors.

If you or your company would like to be included on the list of prominent sponsors, a sponsorship of $5,000 and higher is required. 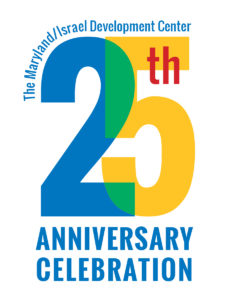