2017 is far from over, but it can already be stated that the Intel-Mobileye deal completed last week was one of the most important events of the year for Israel, if not the most important of all. We are not referring only to its tremendous macroeconomic effect. The billions of shekels from the deal that will stream into the state treasury will give tax revenues a big boost that will compensate to a large extent for decline in GDP resulting from weakness in important real indicators. Yes, it is a one-time event that did not even appear in the preliminary growth forecasts, but we are willing to bet that it will provide a great deal of fuel for the politicians’ public relations machinery.

What we are interested in is the long-term effects of the deal, and it is no exaggeration to say that it constitutes a strategic milestone, and even a turning point in the history of the local high-tech industry. Even before the deal, the Israeli auto-tech sector was on the map of the auto industry and the venture capital entrepreneurs, which gave it the reputation of an incubator for interesting ideas and investments in the smart car sector. The creation of Intel’s global smart car division in Israel, however, raises the Israeli industry into the big time.

Intel’s ultimate goal in the merger is much broader than the realm of sensors and machine vision in which Mobileye specializes, and Intel is making no secret about it. At the recent annual Deutsche Bank auto-tech conference, Intel’s autonomous driving group’s CEO unveiled the company’s plan to provide the auto industry with a comprehensive computer solution, entitled GO. This holistic ecosystem solution will provide all the autonomous vehicle manufacturers’ needs: development of a platform for autonomous driving based on Mobileye’s chips and Intel’s processors, 5G communications between the vehicle and the cloud, and special data centers solutions for processing and commercialization of the data produced from the vehicle. 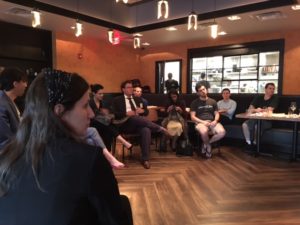 Last Tuesday, the MIDC and their business development manager Adam Lipert held their summer’s young professionals happy hour at Owen’s Ordinary in North Bethesda. Young professionals representing start-ups such as Place Tempo, multiple embassies including the Israeli Embassy, and biotech non-profits to name a few, came out to network and mingle. Attendees were treated to a talk by the CEO of an Israeli multispectral camouflage company located here in Maryland who discussed how his company was able to enter the US market in Maryland as well as how he used his experience in the special forces to succeed in business and grow a company.

“The event portrayed one of the many Israeli companies expanding business in Maryland building upon competitive advantages and cutting edge technologies while demonstrating mutual economic benefit, job creation and growth in both countries,” said MIDC volunteer and organizer Ilana Moyal (Acting Head of Economic Mission for the Ministry of Finance at the Israeli Embassy in Washington D.C.).

The MIDC would like to thank everyone who came out and we look forward to our next event and seeing everyone again (see our list of future events here! Please feel free to reach out to us anytime to discuss business opportunities in Israel and Maryland including grants from the BIRD Foundation which provides matching grants of up to $1 million for joint US-Israel R&D for new product collaboration.

Silicon Valley giant Intel on Wednesday announced plans for a fleet of self-driving cars following its completion of the purchase of Israeli autonomous technology firm Mobileye.

A day after closing the $15 billion deal to buy Mobileye, which specializes in driver-assistance systems, Intel said it will begin rolling out fully autonomous vehicles later this year for testing in Europe, Israel, and the US.

The fleet will eventually have more than 100 vehicles, according to Intel.

“Building cars and testing them in real-world conditions provides immediate feedback and will accelerate delivery of technologies and solutions for highly and fully autonomous vehicles,” said Mobileye co-founder Amnon Shashua, who is to run the unit for Intel.

“Our goal is to develop autonomous vehicle technology that can be deployed anywhere.”

The Intel test fleet with include various types and makes of vehicles, and capitalize on Mobileye expertise in computer vision, mapping and sensing.

Gov. Larry Hogan called it the first stand-alone and hands-on training cybersecurity training center in the nation. The center, created by technology firm Cyberbit, based in Israel, opened in Spark Baltimore, a co-working center just north of the Inner Harbor. Hogan announced the center’s creation during his trade mission to Israel last September.

“It will provide the most-up-to date training for our cyber force, further demonstrating that Maryland is truly the cyber capital of America,” Hogan said Thursday in an announcement.

The Cyber Range will use a platform developed by Cyberbit, which develops simulated training products. Cyberbit’s Range Platform gives security teams hands on training in realistic settings and allows them to keep pace with evolving cyber threats.

In big data, cybersecurity, software IT, Internet of Things, AI and machine learning, auto-tech and much more, Israeli startups are hunting hard to hire qualified personnel.

The past few days have been full of Israeli startups announcing new financing rounds. According to “Globes” data Israeli startups raised nearly $500m in June, with many other Israeli technology companies expanding rapidly. Hundreds of jobs are on offer in local companies: Big data, cybersecurity, software IT, Internet of Things, AI and machine learning, auto-tech and much more.